A four-day marathon of college basketball concludes today, hopefully with a few more exciting games than we had yesterday. The second game in Orlando Saturday afternoon will be forever burned in my mind as the shining (?) example of the worst this sport has to offer. Sadly, you will need to find TruTV again tonight, but you can forget about it again until next year's First Four!

Share All sharing options for: NCAA Tournament 2014: Schedule And Bracket For Sunday's Games

If you're still looking for a bracket to track tournament results or your picks, feel free to use SB Nation's printable bracket for 2014. 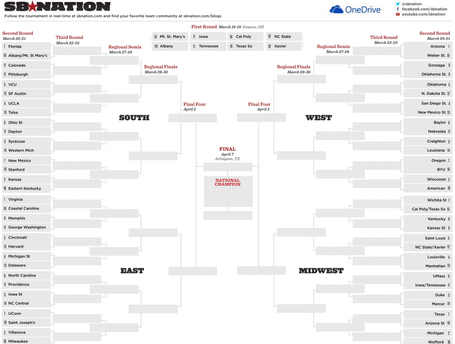 The Nantz team, unsurprisingly, gets the national doubleheader this afternoon. Also, Andrew Catalon will continue to call games in San Diego, despite his use of an ethnic slur during the foul fest that was Oklahoma State-Gonzaga, an incident he apologized for on air later in the game.

Joel Embiid will again be out for the Jayhawks, who are likely happy that they don't have to play New Mexico Lobos in a rematch situation. The Cardinal simply as much of a defensive threat as the Lobos. In game two, a pair of teams who might just feel they've been disrespected square off -- the Cats can't possibly care much for their seeding, while many observers -- feel the Shockers' potential path to North Texas is a bit too stern.

The two 3 vs. 6 games stand out to me as being the ones most likely to be fun to watch, as all four teams involved put defense on the back burner. Iowa State's chances in San Antonio might have dropped a bit with the news that forward Georges Niang broke his right foot in Friday night's easy win over NC Central Eagles. That's almost 17 points per game out of the Cyclones' rotation.

A trio of double-digit seeds will attempt to join Dayton Flyers on the second weekend, with one guaranteed to get there. That place will be decided in Raleigh, where Tennessee will attempt to avenge the beating Mercer handed it in Knoxville in the 2013 NIT. In San Diego, Stephen F. Austin takes on UCLA just two hours or so from Westwood, depending on the traffic, meaning its chances to grab a victory tonight may not be a great as they were on Friday.

The Round of 32 closes with a pair of No. 1 seeds in action. Both will need to drastically improve on Friday's indifferent performances to get past the talented and tricky eights they're drawn against.