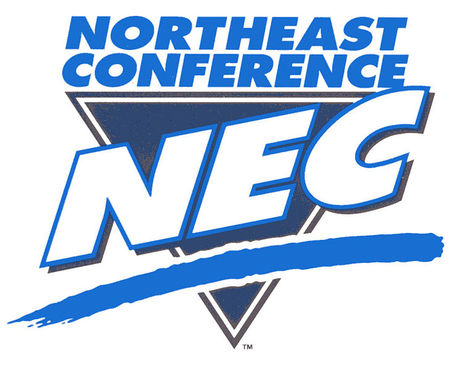 Robert Morris was the final NEC team to qualify for the NCAA Tournament during the first decade of the 21st century, and like all of the others, they failed to register a win in the field of 64, falling to Michigan State in round one. Monmouth and Mount St. Mary's were the only team to register a tournament win in the decade, as they both won the Opening Round games, in 2005 and 2008 respectively.
The Colonials and Mountaineers will again be threats to claim the Northeast Conference's (probable) only bid, while Quinnipiac, who's never made the Tournament during their short time in Division I, are a serious threat to break down the door. However, the same fate undoubtedly awaits which ever team gets in, a low seed (though hopefully not a spot in the Opening Round) and yet another early exit.
Or is it? Perhaps this is the year when the bottom of the league finally gets its act together, boosting the league's RPI? Or it's the season where one of the contenders claims some major conference victims in the early weeks of the season? Such is life in one of the most disrespected D-I leagues...one spent daydreaming of the miraculous campaign that will finally bring national respect.
In membership news, the NEC adds one more team to the club of dreamers, as transitional D-I member Bryant plays a full league schedule. However, they still have a three-year wait for tournament eligibility.
More on all 12 teams after the jump.

Let's first take a look at the 2008-09 Northeast Conference standings.

Now, here are my picks for 2009-10, presented in reverse order, starting with Bryant, as they are ineligible for the conference title.

Bryant (last NCAA: None) While Tim O'Shea's team was the Division II runner-up in 2005, they may have a hard time adjusting to life in D-I. For starters, they'll only play two non-league home games, against Columbia and Brown. The schedule also sees the Bulldogs heading down the road to Providence, where they'll join the Friars, Mercer, and Bucknell in a round-robin event. O'Shea has three starters back from last year's squad, including 6-5 F Cecil Gresham (13.4 ppg, 4.7 rpg).

Wagner (last NCAA: 2003) Mike Deane's Seahawks lost four starters from a season ago, who combined to averaged almost 48 points a contest. The only returning starter is 6-7 senior C Michael Orock, who only averaged around 3 points and 3 boards a game. Wagner's leading returning scorer? 5-10 G Chris Martin, who averaged 6.1 points a contest, while shooting better than 45% from 3-land. Needless to say, Deane will need to see a lot from the 7 freshmen on his roster. The Seahawks have to travel to BYU and Nevada for the Las Vegas Classic, where they'll play Jackson State, then Eastern Washington or Chicago State in the undercard for the main event.

Fairleigh Dickinson (last NCAA: 2005) After two disappointing seasons, FDU dismissed longtime coach Tom Green over the summer and replaced him with assistant Greg Vetrone. Last year's starting point guard Cameron Tyler graduated, but his backcourt-mate 6-3 SG Sean Baptiste, the team's leading scorer (16.3 ppg, 5.9 rpg) returns. 6-0 JC transfer Mike Scott will move into Tyler's slot, and if he can perform well, the Knights may move up the standings. That's because FDU has some talent inside: 6-8 Alvin Mofunanya (9 ppg, 5.5 rpg), 6-8 Kamil Svrdlik (6.9 ppg, 3.5 rpg), and 6-9 C DeJuan Pursley, who averaged 5.3 points and nearly 4 boards a game when he was last healthy in 2007-08. The Knights open their season at Villanova and travel to Wichita State for the CBE Classic. They'll also visit Eastern Kentucky for one of that event's "subregionals," where they'll also take on UT-San Antonio, and UC Irvine.

St. Francis (NY) (last NCAA: None) The Terriers have hope after a 10-win season, as four starters return, led by 6-2 junior G Ricky Cadell (15.3 ppg, 40% from 3) and fellow sharpshooter 6-6 Serbian soph Stefan Perunicic (10.8 ppg, 38.8% from 3), with another 3-point specialist 6-5 swingman Kayode Ayeni (13.3 ppg, 38.8% from 3) coming back from a knee injury. The frontcourt is an issue, as 6-7 F/C Nigel Byam and 6-7 F Herman Wrice didn't even combine to average 10 points and 9 boards last season. 6-9 JC transfer Alexander Harrington should push them immediately. The Terriers travel to Boston College, Syracuse, and UMass this season.

Monmouth (last NCAA: 2006) The Hawks will welcome Isiah Thomas' FIU team and Seton Hall to their new arena to open the season. The new building will see a Monmouth team that returns all five starters from a disappointing 8-23 club. 6-3 Rutgers transfer Justin Sofman becomes eligible this season, and coach Dave Calloway hopes his arrival will help out an offense that returns only one double figure scorer, 6-8 sophomore F/C Travis Taylor (12.4 ppg, 5.8 rpg).

Sacred Heart (last NCAA: None) The Pioneers were the highest scoring in the NEC last season, but they may not put as many points on the board in 2008-09, as two of last year's four leading scorers Joey Henley (15.7 ppg, 6.7 rpg) and Ryon Howard (10.7 ppg, 6.5 rpg) have moved on. F Corey Hassan and G Chauncey Hardy are back, however, and they both averaged around 11 points a contest. If guards Ryan Lithe (7.9 ppg) and Shane Gibson (8.1 ppg off the bench) can pick up their production, SHU will be in good shape offensively. The frontcourt is a weak spot, and 6-9 Turkish junior Mehmet Sahan, 7-0 British senior Liam Potter, and 6-9 redshirt freshman Nick Greenbacher will see plenty of minutes. The Pioneers will participate in the Connecticut 6, where they'll play Yale. Visits to Xavier and Penn State are also on tap this season.

Central Connecticut State (last NCAA: 2007) Howie Dickenman's team should be able to improve on last year's 8 NEC wins, thanks to the return of four starters. 6-0 junior PG Shemik Thompson (16.5 ppg, 5.8 apg) is among the best the league, and 6-3 sophomore Robby Ptacek should certainly improve on the 10 ppg he averaged last season. 6-6 junior Ken Horton--a threat for league honors and the team's leading scorer, averaging 16.5 ppg--is back to lead in the frontcourt, where he'll be joined by 6-5 David Simmons (6.8 ppg, 5.2 rpg) and 6-6 freshman Joseph Efese. The Blue Devils have a unique scheduling situation where they play Independent Savannah State three times: home, away, and at a tournament at the Citadel.

Long Island (last NCAA: 1997) While the Blackbirds lost two starters, after the late offseason departure of 6-8 Lithuanian Aurimas Adomaitis, LIU should still contend in this league because of the talent that's still in place. The Blackbirds are led by the backcourt trioof 6-1 senior Jaytornah Wisseh (15.2 ppg, 4.4 apg), one of the top players in the entire conference, 6-3 junior Kyle Johnson (13.8 ppg, 5.2 rpg), and 6-1 junior David Hicks (8.3 ppg, 3.8 rpg). 6-7 Julian Boyd was a key bench player last season, averaging 10.5 points and 6+ boards, but he'll be even more valuable now that Adomaitis is gone. However, 6-10 JC transfer Milos Nikolic should make an immediate impact inside. The Blackbirds visit St. John's this season, and they'll also travel to Chattanooga for a holiday tournament featuring Morgan State and Eastern Kentucky.

Robert Morris (last NCAA: 2009) The defending champions should contend again, especially because of their defense, but they'll have to begin life without last season's leading scorer, Jeremy Chappell. That means the returning backcourt players, 5-11 senior Jimmy Langhurst (9.9 ppg), 6-3 junior Gary Wallace (5.9 ppg), and 6-4 senior Mezie Nwigwe (6.5 ppg), will have to up their scoring. 6-8 seniors Rob Robinson (11.2 ppg, 5.6 rpg) and Dallas Green (6.4 ppg, 4.3 rpg) anchor the frontcourt. The Colonials travel to Syracuse for the Coaches vs. Cancer Classic, and they'll also visit Albany for one of that tournament's "subregionals," where they'll also play Detroit and Alcorn State. Trips to Duquesne and Penn State also appear on the schedule.

Quinnipiac (last NCAA: None) The Bobcats are a serious threat for their first ever tournament appearance because of the amount of talent they have returning from last season's squad that claimed 10 NEC wins. Tom Moore has a loaded backcourt for his third campaign, as starters James Fedeline, a 6-4 senior who averaged 17.6 ppg last year, and 6-0 soph James Johnson, a point guard who scored almost 10 a game while dishing out at little more than 4 assists a contest. 6-3 senior reserve Jeremy Baker averaged 10 points a game himself last season, while Evann Baker, who averaged almost 11 points a game back in 2007-08, returns from a knee injury. 6-7 junior Justin Rutty (14.8 ppg, 9.8 rpg) is a true frontcourt force, and he'll be joined by 6-6 Rhode Island transfer Jonathan Cruz and 6-7 frosh Jamee Jackson this campaign. The Bobcats will face Hartford in the Connecticut 6 Classic, and visit UMass and Cruz's former school.

Mount St. Mary's (last NCAA: 2008) Milan Brown only returns three starters from last year's NEC runners-up, but they are his three leading scorers. 5-9 senior Jeremy Goode (14.9 ppg, 4.1 apg) is the team's heart and soul, while 6-3 junior Jean Cajou (12.6 ppg, 3.5 rpg) is another major offensive threat. In the frontcourt, 6-5 senior Kelly Biedler (10.9 ppg, 6.9 rpg) will get more help this year, thanks to the emergence of 6-7 reserve Shawn Atupem (9.6 ppg, 3.5 rpg) and the arrival of 6-9 Croatian C Kristijan Krajina. 6-4 senior swingman Will Holland, who averaged nearly 5 points a contest last year, is another player who could contribute more. The Mountaineers open their season at Oklahoma; travel to American, Boston U, Georgetown, Old Dominion, and Pitt; and host Loyola (MD), Niagara, and Vermont.

The Mountaineers will appear as Northeast Conference champions in my 2009-10 Final Preseason Bracket, which I will release on November 9.

To wrap up this preview, here is my preseason All-NEC team, featuring the best returning players from last season.