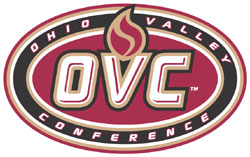 Murray State was the last team to claim the Ohio Valley's automatic bid in consecutive seasons, and that was back in 1998 (under Mark Gottfried) and 1999 (under Tevester Anderson). Since then, the Racers, Austin Peay, and Eastern Kentucky have basically played musical chairs with the conference's auto bid, with Southeast Missouri and Eastern Illinois making cameos at the turn of the century. Last year, when it already looked like that Tennessee-Martin was going to break this particular triad, the Skyhawks tumbled in the OVC semis. The team that kept Lester Hudson off the national stage was another interloper, Morehead State. The Eagles knocked off Peay in the final to clinch their tournament bid in a quarter century.

Now, the target is on their back. Morehead will have to defend their title without the graduated Leon Buchanan, though rebounding machine Kenneth Faried, who's only a junior, leads the Eagles' four returning starters. Austin Peay brings back three starters themselves, but that group doesn't include Drake Reed, who averaged just under 22 points a game last year. The Skyhawks are in rebuilding mode, as they lost two starters other than Hudson. The Murray State Racers, who finished in second last year (and a game ahead of Morehead in the standings) looks like the best option to challenge their in-state rivals, as they return three starters, three double figure scorers, and some key bench components.

The real proof will come when the conference season starts in December. OVC teams play a grinding 18-game double-round robin schedule, which can lead to some surprising results during the regular season. However, given how the league has been dominated by three schools over the past decade, expect some sort of order to be restored in the tournament. The key question is whether last year's champs are now part of that order or simply an anomaly. Given how tight this league can get, f you have the chance to see an OVC game live or on TV (even if it is televised against some major conference showdown) this year, do it.

Southern Illinois-Edwardsville will become the conference's 11th member next season, so the double-round robin may very well end. This year, the Cougars will play a varied schedule, including several future league opponents. More on the ten teams in this year's edition of the OVC after the jump.

Now here are my picks for the 2009-10 season, presented in reverse order.

Southeast Missouri (last NCAA: 2000) Former Arkansas State coach Dickie Nutt, brother of Ole Miss football coach Houston, takes over in Cape Girardeau, and he has quite a mess to clean up. Former head coach Scott Edgar was fired right before the New Year for a variety of infractions just appealed the three-year "show cause" penalty the NCAA tagged him with. On the court, things don't look promising, as the Redhawks three leading scorers of a year ago are all gone, taking an average of 52 points and 14 boards with them. Considering SEMO hasn't won an OVC game since January 29, 2008, the new regime will have to be patient. The out-of-conference schedule is manageable, however, as road trips to St. Louis and Memphis, and a round-robin tournament at Illinois State are the most challenging outings.

Tennessee State (last NCAA: 1994) Much like SE Missouri, the Tigers will have a new bench boss this season. Former Auburn assistant John Cooper takes over for Cy Alexander, who was relieved of his duties back on February 9, when the Tigers stood at 4-9 in the league. They rallied to six in a row, five OVC games and a BracketBuster with Detroit, to finish with a .500 league mark. They closed the season with a loss to Murray State in the OVC tournament. Tennessee State's won't have much momentum heading into this year though, as four of the starters off last year's team are now gone, with only guard Jeremiah Crutcher returning. Cooper will need big contributions from his four JC transfers and five freshmen to avoid the basement. The Tigers welcome Siena to Nashville and participate in the low-major bracket in the Chicago Invitational, after taking probable road beatings at the hands of Iowa State and Northwestern.

Tennessee-Martin (last NCAA: None) The Skyhawks will attempt to replicate the greatest season in their history without superstar Lester "Done Ruthless" Hudson, a newly minted Boston Celtic, and head coach Bret Campbell. His replacement, former assistant Jason Jones, is young (my age in fact...oy), and it may be a rough first year for him. The Skyhawks return only two starters, guards Marquis Waddle (13.8 ppg) and Delrico Lane (5.1 ppg, 4.9 apg), and feature an inexperienced frontcourt.

Jacksonville State (last NCAA: None) The Gamecocks won 9 Division I games in their first year under James Green, an improvement over the five they won the year before. However, JSU lost their final six contests of last season. Three starters were due to return, until 6-5 F Geddes Robinson (8.2 ppg. 4.9 rpg) transferred to Western Nebraska CC in August. Leading scorer Jeremy Bynum (12.9 ppg, 3.6 rpg) is back for his junior year; however, Green has to replace DeAndre Bray, who averaged nearly 5 assists per game at the point. JC transfer B.J. Miller and freshman Samir Rolley are possibilities. Meanwhile, much is expected of 6-5 swingman Trenton Marshall, another JC transfer.

Eastern Kentucky (last NCAA: 2007) The Colonels have a leg up on most of the league, as they return four starters. They'll have a hard time improving on last year's 5th place finish, however, when you consider that 20 point a game/does everything well-man MIke Rose is the missing starter. Senior forward Josh Taylor (10.9 ppg, 3 rpg) and junior swingman Justin Stommes (10.1 ppg, 3.3 rpg) are the only two returnees who averaged in double figures last season. Making matters worse for head coach Jeff Neubauer, sophomore Jorge Camacho, a 6-7 forward who averaged 6.3 points and 3 boards a contest, left the program during the offseason, giving EKU one less option. The Colonels will host one of the low-/mid-major "subregionals" in the CBE Classic, after they visit Pitt for their first game in the event.

Austin Peay (last NCAA: 2008) The Governors nearly made it two NCAA trips in a row last season, but they had to settle for the CollegeInsider tournament after dropping a double OT thriller to Morehead State. Dave Loos' squad should compete for the crown again, though like EKU, they'll have to do so without their Mr. Everything. Drake Reed, who averaged almost 22 points a game, while grabbing 7.5 boards a contest is gone. However, his key backcourt-mate, Wes Channels (16.5 ppg, 3.8 rpg) is back. If Loos can get some of the other returnees and even freshmen Eric Mosley and Chris Reaves to contribute some more points, APSU should challenge their Kentucky rivals for the crown. The Govs will travel to Daytona Beach to take on IUPUI, NC State, and Niagara in the Glenn Wilkes Classic, after traveling to Akron for the same event.

Murray State (last NCAA: 2006) While the Racers lost two starters from the team that finished a game behind Tennessee-Martin in last year's OVC race, Billy Kennedy still has a roster that can challenge for the top spot. In the backcourt, two double figure scorers are back, Danero Thomas (12.5 ppg, 4.5 rpg) and Isacc Miles (10.6 ppg, 3 rpg), and Jewaun Long (4.3 ppg in '07-08) returns from a knee injury to provide some bench support. The frontcourt is in good shape as well, thanks to the presence of 6-6 Jeffery McClain (6.4 ppg, 5.3 rpg), 6-7 Ivan Aska (10.3 ppg, 5.8 rpg), and 6-9 center Tony Easley (6.7 ppg, 5.4 rpg). The Racers participate in the Coaches vs. Cancer tournament, where they'll visit California, then travel to Miami to take part in the Florida International-hosted "subregional."

Morehead State (last NCAA: 2009) Leading scorer Leon Buchanan (15.1 ppg, 6.3 rpg) may be gone, but just about everyone else is back from the team that returned Morehead to the tournament for the first time in 25 years. First among these is 6-8 F/C Kenneth Faried, who averaged almost 14 points and an amazing 13 boards a game. Maze Stallworth, who averaged a little more than 12 points and 4 rebounds a contest, also returns, as does guard Demonte Harper (10.6 ppg, 4.1 rpg, 3.4 apg). Besides Buchanan, the other major loss for head coach Donnie Tyndall is 8 point a game performer Robert Murry, who transferred. Outside of a visit to Rupp Arena, the Eagles biggest challenge of the non-conference season is a trip to Logan, Utah, where they'll face three other teams who could win their leagues--Cal State-Fullerton, Weber State, and hosts Utah State.

I'm picking the Eagles to repeat in the OVC, so they'll have the league's auto bid in my 2009-10 Final Preseason Bracket, which I will release on November 9. However, given how hard it is to repeat in this conference, Morehead's name won't be carved in stone. Now, to wrap up this preview, here is my preseason All-OVC team, featuring the best returning players from last season.